Over the last few years, Eric, Rich and myself would send emails back and forth. Especially, when someone at our jobs did something completely stupid. Usually, these emails would skew towards revenge on that person and would almost always turn into how a scene from “Goodfellas” would play out with this person. At some point, Eric and Rich thought that these would make a great short. So they sat down and put together a script for what is now “Techfellas”.

We filmed the entire 17 minute film over the course of 2 days in an office space.  The space was kind of small, so we had to really work the angles so that it looked like it was much bigger than it actually was.

While I had been line producer on most of our films, this was the first one where it was my sole job. Breaking down and budgeting the film out along with securing props and making sure everybody was on set became priority one for me.  Aside from the second day where I accidentally left a camera battery at home and had to rush to get it, everything seemed to go off without a hitch.

The film was well received and was invited to play at the DC Asian Pacific American Film Festival.

It was also found by a popular blogger, which gave us a huge boost in views. (until it was removed due to music copyright infringement. We have since put it back up and share income with the copyright holder)

Lastly, one of our good friends, Joe Hansard, found out that Martin Scorsese was going to be at the Kennedy Center. A couple of the guys went down and were able to actually meet him and give him a copy of Techfellas and The Department (Our other Scorsese parody). 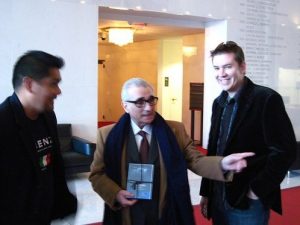 Newzbots.com Newzbots was born out of a love for football.  I initially called it "Football News Network" and every 5...